Emma Martinot is a Dutch national who grew up in Devon, England. After finishing her schooling in the UK she travelled and worked around Western Europe and New Zealand for eight years. Her interest in osteopathy arose after she had impressive results from the osteopathic treatment of one of her many sports injuries. Because of this, Emma decided to return to education and found her vocation as an osteopath.

Emma’s experience and interest lies in all areas of osteopathy. Due to her sporting background and long history of injuries, she has a particular interest in sports therapy and rehabilitation, with a functional approach to any musculoskeletal problem. She also has a keen interest in treating babies and pre-natal mums. Hand in hand with Osteopathy she implements lifestyle changes and self-management advice necessary to help your problem.

Emma’s hobbies are particularly snowboarding and downhill mountain biking, and she spends most of her free time in the mountains and/or travelling.

Prior to coming to Bulgaria Emma was a self-employed osteopath, and also worked at Osteo & Physio, in Cullompton, UK. 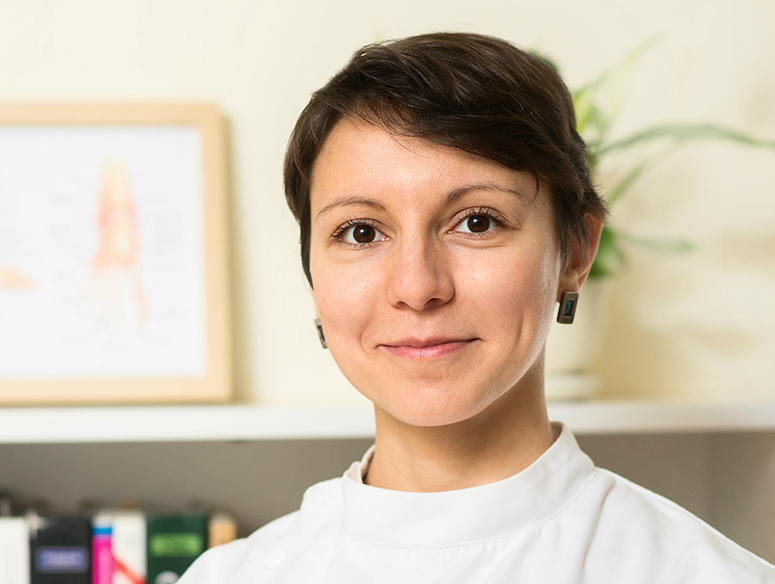 Anna Nikova decided to study osteopathy in England after having visited an osteopath just once. Anna had been suffering from back pain, and she was so impressed with the single osteopathic treatment she had, that years later she decided to change her occupation and practice osteopathy herself.

Already from the first lectures at the European School of Osteopathy, Anna was confident she had found her vocation. She studied with joy throughout the 4 years, her motivation showing by graduating with a First Class Honours. After working for some time in England, Anna didn’t feel very motivated to work abroad and knew that she would be more useful in Bulgaria.

Anna loves nature, especially the mountains and spends at least one day a week in the wilderness. She loves the silence and meditative effect of winter hiking, but she also rides a bike and kayaks in the summer.

Before she returned to Bulgaria, Anna has worked at Plymouth Naturopathic Clinic and at Estuary Clinic both in Devon, UK

Ivan grew up and lived in the city of Razgrad, Bulgaria. He studied kinesitherapy at Ruse University, before moving to the United States to complete his studies in Physiotherapy.

In 2012 he moved to London, where he met with Osteopathy through some colleagues. He was immediately intrigued, and decided to study at the British School of Osteopathy, London. He quickly felt that Osteopathy was the best overall physical health tool, and understood he could use it to help people suffering from many different musculoskeletal and systemic issues.

Due to his varied physical therapy background, Ivan has a broad approach that helps him to treat and rehabilitate a wide variety of disorders. His treatment approach lies in both structural and functional techniques, and due to his sporting background (basketball and volleyball) ha has a keen interest in sports therapy  and rehabilitation.

After graduation in 2017, Ivan returned to Bulgaria in his wish to show and apply his knowledge to the Bulgarian population. He has worked for 1.5 years in his home city of Razgrad as a part of a rehabilitation clinic with a variety of patients, before joining the OsteoMed team in 2019.

Valentin Atanasov left for England after graduating from high school in Sofia. In 2018, he received a BA in International Relations from Coventry University, England. During his studies at Coventry, he became interested in osteopathy and gradually discovered that this was his calling. In 2018, Valentin began his studies at the European School of Osteopathy in Maidstone, England, where he obtained a Master’s degree in June 2022.

During his time at the ESO, Valentin studied various aspects of osteopathic diagnosis and therapy, mastering a variety of techniques through which he could offer a solution to every patient’s problem. In his pursuit of improvement, he completed a course in working with patients suffering from headaches and training in sports injury rehabilitation. Valentin also has a keen interest in treating babies and is particularly interested in the field of craniosacral osteopathy and functional therapy.

Valentin’s hobbies are photography and playing sports. He is filled with a great desire to work in the field of osteopathy and is confident that he can contribute to the development of this still unknown medical method in our country. It is for this reason that immediately after his graduation he returned to Bulgaria and enthusiastically became part of the OsteoMed team.